The 44 year old former Indian cricketer and Indian captain believes that the  19 year old Delhi boy could be an exciting prospect to add in the middle order, he also thinks that  Suresh Raina should be on the team.

Today team India will play their first T20 match against England at Kanpur and there will be two more T20 there, a three match series, this series team would have a few new faces, the 44 year old thinks it is an ideal platform for others to showcase their talent and he will keeps his eye on Rishab Pant,

In an interview the left handed batsman speaks that what would be an ideal team combination for team India.

Team India decides to give rest many seniors players for this T20 series and instead of them many new faces will be there, players like  Yuzvendra Chahal and Ashish Nehra, Suresh Raina, Parvez Rasool, Rishabh Pant, Mandeep Singh they are added to the squad, with their  team India have to get the best combined team.

Rishab Pant the Delhi boy has gathered the  bulk of runs this season, his playing style has he admired by many and also Sourav Ganguly do so, and the 44 year old thinks that it is a perfect opportunity for the Young player to excel his talent.

Ganguly quoted: “It’s a great oppotunity for allowing these youngsters to come and play. Once they come in, you will see how good they are. The selectors are speaking very highly of Rishab Pant. I was sitting in the box the other day at the Eden Gardens speaking to one of the selectors and even some of the people who have watched him play say that some of the shots he played in the warm-up game against England were unbelievable,”

Sourav Ganguly thinks that the way the Rishab Pant plays middle order will be an ideal place for him.

Ganguly added: “That’s how young talents are unleashed and that’s how I think Rishabh Pant should be thrown into the deep end. He is someone who doesn’t hold back. You have seen his performances in Ranji Trophy, he just likes to hit the ball and I think he could be a good option in the middle order,” 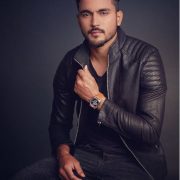