The former Indian cricketer and the current coach of Mumbai Indians, Robin Singh, said that the presence of skipper Rohit Sharma adds more balance to his side.

VIVO IPL 2018: Teams are preferring to chase as they have a depth in their batting order, says Robin Singh

Rohit Sharma was not in a good form at the beginning of the 11th edition of Indian Premier League. He got his lost touch back against the Royal Challengers Bangalore when he scored 94 off 52 balls, before getting out in the penultimate ball and missing out on a well-deserved century.

With that gem of an innings Rohit, coming at number four, put an end to the debate as to which position he should bat for Mumbai Indians.

MI coach Robin Singh also believes that Rohit can play in any position, from opening to middle order, and his versatility adds a great balance to the team.

“Rohit in the middle order gives the team a great balance. Lewis as an opener has done exceptionally well. I don’t think we need to have explosive players everywhere. You need to have a combination of different players in the line-up. Rohit can play any role for us and that is the important thing.”

Robin has also given his views on why teams prefer to chase these days. He feels that the dew-factor plays a major role, alongside the depth in the batting order of a team.

“Scoreboard pressure is scoreboard pressure. I think most teams prefer to chase now because the batting is quite deep. Being a Twenty20 game, the wickets are more batting friendly. There is a lot of dew in this part of the world in this time of the year. I don’t care what people say that they prefer to chase. If one restricts teams in the first six overs while chasing 180-190, there is always pressure,” Robin Singh said. 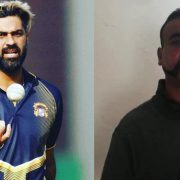