Sabrina Park Stadium saw yet another milestone achieved by the team India, A total of 500 odd runs was scored in the first innings with Lokesh Rahul & Ajinkya Rahane leading the runs arena with a ton each.

When team India reached a perfect 500 milestone mark rain stepped in and stopped the days play with just 46 overs being bowled and India has declared their innings at 500/9 with Ajinkya Rahane unbeaten obviously a moment to cherish upon for the team. It was his 7th test century for Rahane and 5th away from home the stats certainly reveals that this player likes to play and perform in foreign soils as compared to the home pitches.

Roston Chase gave the best performance for his side stating 5/121, which is the maiden five-wicket haul by a West Indies spinner against India at home since David Holford’s 5/23 in Bridgetown in 1976.

India is now leading the match with 304 runs at the end of the 3rd day of play, when the match resumes it will be the host nation on the batting, we will find out as of how the 2nd innings will move, so keep tuned and follow up the other side of the match. 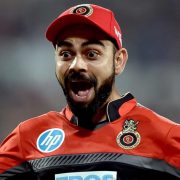