It is a turning track at Colombo an playing against Herath an company with the likes of spin is always going to be a difficult ask for the batsmen to bat on, but Rahane said he was very comfortable this very time

“When we played last time here against Sri lanka, especially after Galle Test match, we decided that using footwork against him [Herath] was very important,” Rahane said on Day 2 after India worked their way to another 600-plus total. “Here again in the first Test, Shikhar [Dhawan] batted really well, but throughout against him and their spinners we wanted to use our footwork so we could get more runs on the backfoot.

“Especially on this kind of wicket, it is very slow and dry, so we knew that if we use our footwork we will get more runs on the backfoot. So when I went in to bat with Pujara, we decided to change our momentum because Virat got out and we wanted to put pressure back on them and that’s what we did. So we knew using footwork we would get more runs on the front foot as well as the backfoot.”

Rahane’s momentum-changing innings evoked memories of his attack on Mitchell Johnson in the Melbourne test of 2014, when he comfortably outscored Kohli in a memorable partnership. That comparison wasn’t lost on Rahane too as he set about laying the foundations of the 217-run stand. “I wanted to take my time initially but later on, we thought if we dominate, if we change the momentum, they will be on the back foot straightaway, and that’s what happened,” he said.

“It was all about mindset coming into this game, we knew that they will give us a spin track and I think after day one we knew that the ball will… I mean its not going to be easy for batsmen. I was visualising even in dressing room and also in my room, just thinking about what are the important, good shots on this wicket and how I am going to dominate their spinners. It was one of the best innings against spinners,” he added.

The 132 ended a sequence of 17 innings without a Test hundred for Rahane, who despite rating the knock “important” revealed that he was confident that a big score was around the corner. Presently, India have Sri Lanka two down for 50 on a fast-deteriorating track with the prospect of a follow-on looming large.

“Some balls are bouncing, few balls are keeping low. We knew that if they play sweep shot it’s good for us, we have the chance to get wickets. But it’s not easy for batsmen playing on this wicket. Tomorrow will be key to our bowlers to bowl in right areas for long period of time,” he said. “We are not thinking [about the follow-on] as of now because as I said, it is not going to be easy for our bowlers as well. They have to bowl in right areas for longer period of time. Yes, the wicket is turning, it is not easy for batsmen. But for the bowlers, we have to bowl well and get their eight wickets. Let’s see, we will wait and see tomorrow.” 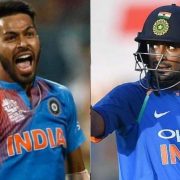