Cricket News: Brendon McCullum has been a consistent player in all the seasons of IPL and with his arrival to RCB in IPL 2018, he brings an extra bit of leadership skills with him.

VIVO IPL 2018: RCB’s return on investment lies on how McCullum teams up with Captain Kohli

Ahead of RCB’s opening home match, he commented, “I guess when you’re 36 and you’ve played around a little bit, you’ve got a few experiences that you can try and assist your captain with.”

RCB had earlier decided to fight with Rajasthan Royals and Delhi Daredevils for the services of McCullum in the IPL auction. Besides his batting skills the franchise wants to see how he teams up with Kohli and other leading figures.

They’ve done it all before, shown you glimpses at Kolkata and are eager to display their full range in the coming games! #PlayBold

“Virat and I, our relationship is very good as well. He’s open to some of the things I come up with. The first thing we did is I spoke to him when I arrived. I said I’ll throw a whole lot of ideas at you. You don’t feel like you’ve to use any of them.”

“But I hope he feels confident that he knows that myself and AB and Quinton as well, who is a very astute thinker of the game, we’ll give him ideas and his prerogative is to be able to use the ones he wants to and make the decisions. It’s a tough job, to make the final decision. But I think it’ll work well,” said McCullum.

The 36-year-old has quit international cricket and now plays in T20 leagues for different franchises all across the globe.

When asked about his new IPL franchise, he said, “That’s something I like about this franchise, they are very calm, very muted and very determined to try and achieve success. They also treat you fantastically well as a person and offer an opportunity for you to go out there and express yourself.” 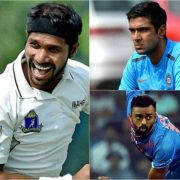