The current head coach of India that has started tasting success since he joined the team as a coach has very much involved himself direct from the test to the T2Os that is a very big ask for Jumbo to perform.

While being asked by the media about the match that will be live on 27 & 28 of August against the giants of cricket West Indies, Kumble said that its really going to a tough ask for the team and specially for the team to take over the current world champion of the shorter format.

“It is a mindset change and not easy to switch your focus from playing a Test series and coming into a T20 mode,” Kumble said at the Central Broward Regional Park Stadium Turf Ground in Florida on Thursday (August 25). “Both bowlers and batsmen need to make adjustments. It is not easy, but all of us are professionals and they have played enough T20 cricket to adjust. It is more in the mind.”

.
Anil Kumble also came up with some inspiring agenda covering out for the Indian team as they have really performed up to the mark in the last half a year or so in this format of the game and have proved themselves at most of the difficult situation given through, India is currently in the second spot in the ICC T20 ranking with New Zealand at the top with 4 points ahead.

However the coach is not focused mainly and entirely on the rankings his funda for the game is to play good and sensible cricket for the nation.

“Well, not really. The rankings are on everyone’s mind and we keep hearing about it where you’re in terms of standings. But the critical point is you (have to) play some good cricket. Yes, the Test series victory was very good. Even if you look at India’s T20 record over the past six months, it has been pretty impressive, and that is something we would like to take forward in these games as well.”

The former leg spinner summed up sharing his views about working with Dhoni as a coach for the very first time.

“It was very welcoming. In my first press conference itself at my home town I mentioned that I was welcomed by the team. It has been really wonderful. Of course, the start always makes it sweeter, when you have success. I can’t ask for a better set of players in terms of what I want from them. They are extremely committed and very disciplined.

“This is the first time I will be working with Dhoni. We have played together over a long period of time and we had a chat yesterday and today as well. I’m really looking forward to working with him, and the new set of boys who have joined the team, including (Jasprit) Bumrah. It is nice to be a part of the Indian dressing room again,” Kumble summed up. 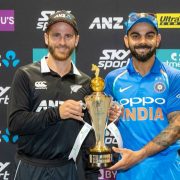