Virat kohli said in an interview that he will definitely make a hard comeback leaving behind all the grudges and bad experiences he has got from the IPL 2K17, it is better to move on without forgetting the vulnerable past

This season the RCB side did not manage to pull out the strings and they displayed a shabby performance so far.

The RCB side lost eight matches so far and they are out of the tournament after they lost their match against the Mumbai Indians side their hope was ended for this season’s IPL to qualify for the playoffs.

Last season’s finalist RCB face a bitter fate this time and the star-studded team fell depressed after getting knocked out of the tournament.

But this season the RCB captain Virat was also like others unable to perform for his side, there were question arises that if it will affect his mindset before the Champions trophy,

Virat’s teammate Kedar Jadhav it will not affect anything n Virat as he is very determined and also very positive.

Jadhav said: “Virat Kohli has always been positive and he stays same after scoring a ton or getting out for a low score and the current IPL results won’t affect him during the Champions Trophy 2017 in England,”

“He (Kohli) lives like a machine. He follows his daily regime very vigorously and is extremely professional, and people can learn this from him,”

This year after getting back from his shoulder Virat has gone through a very lean patch according to his standers,

This year he only scored 239 runs with three half Centuries but last year he has single-handedly guide RCB to the final by scoring four centuries and ton of runs for them in the IPL.

Questioned asked to Jadhav is RCB is too dependent on the senior players he voiced: “The kind of form Virat, Gayle and ABD were everyone would like to believe on them. So maybe, we got flowed enough by that fact and the youngsters didn’t get enough chance to play and prove. Yes, we were much dependent on the seniors!”

The RCB player Kedar Jadhav will be with the Indian squad for the Upcoming Champions trophy, he expressed he love to take responsibilities, in the past he had done a fair job at the No 6 position and he is willing to do more. 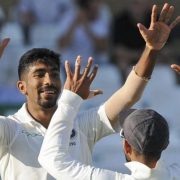