The ODI series between India and England ended couple of days back with the hosts winning the series 2-1 despite the fact they had lost the first game.

Cricket news: The main concern was Dhoni’s strike rate of 63 in the last two ODIs

Eoin Morgan and Co. won consecutive matches at the Lord’s and Headingley to seal the series, thanks to back-to-back centuries from Joe Root.

The Men in Blue had their fair share of problems to deal with during the ODI series, especially with the batting of former skipper Mahendra Singh Dhoni.

Dhoni scored just 37 and 42 runs in the last two games but what was more astonishing was that he played a very slow pace, managing a strike rate of just 63.20, and did not accelerate during the hour of need and as a result received huge criticisms from the public.

Moreover with just one year left for the 2019 World Cup, team India has not yet finalised their number four slot which has been a conundrum for a while now.

“India came into this tournament, looking pretty settled, deciding who the number four should be. You’ve tried Yuvraj, Rahane, Manish Pandey and so many others and then India went back towards the end to back Dinesh Karthik and tried KL Rahul. Number 4 is open and I find that staggering in a country with so much talent,” Bhogle was quoted as saying by Cricbuzz.

“Suresh Raina has been around since 2006. He has been a fantastic white-ball cricketer for India but is he still pulling his weight in the side. I love the attitude that Raina brings to a game, but I’m afraid, the answer to that has to be a no. MS Dhoni at six, it’s very difficult to say that about a legend, but he’s not doing it with the bat.

With Dhoni, there’s a couple of things. Dhoni is also the spin-bowler’s captain standing up. He allows Virat Kohli to go back in the deep and can Dhoni find a new role for himself. He can bat at number four, gets the time or does he just go in at six, seven and start to slog around. But India need to find a solution to MS Dhoni. He’s a legend, he’s too big a player. The decision has to be taken around now,” he added.

Kohli and Co. will now prepare for the five-match Test series and the first Test will begin from August 1 at Edgbaston. India will try to make amends as the last time they played a Test series against England, they lost the series by 3-1. 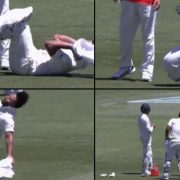