Hadddin on a serious node asked the senior players to step forward and take the initiative rather than giving all the flow of garbage onto the debutants.

It was altogether a disblissful performance by the team from which just Warner and bailey managed to score half a ton.

“At the end of game I heard Davey (David Warner) and Steve Smith talking about how our bowlers need to step up a little bit,” Haddin said on The Big Sports Breakfast radio on Tuesday (October 4). “But we had a couple of guys on debut, we had all our senior batters there. I think the batters were a little bit disappointing to be honest.”

The 38 years old Haddin is eyeing on the national side and said that they have faced same kinda situation earlier against Srilanka by 3-0.

“Yeah it was a tough day for the bowlers but those guys are on debut, they’ll be better for the run.”

“I don’t mind guys getting an opportunity at the international level,” he remarked. “Those guys did really, really well in the ‘A’ series, but it shows the jump that’s needed, the difference between ‘A’ cricket and playing for your country. It is a big jump to play international cricket and guys have got to get used to it if they want to make a name for themselves.” 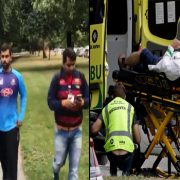