Cricket in India has become a passion, obsession a game of talent and wits. Thus in every nook and corner of an Indian’s life, cricket makes its everlasting presence felt. It’s commonly believed that cricket was first introduced in the Indian Subcontinent in 1721 when a group of English sailors played the game in Kutch. The present Calcutta Cricket and Football Club were already present in 1792 and another club was formed in Seringapatam in 1799. The Parsi Oriental Cricket club formed in 1848.

Since then India has come a long way when in 1864 the oldest cricket stadium was established in Kolkata known as the “Eden Gardens”. It is known as the Mecca of cricket, because of its loud and cheering crowd and it’s a privilege for any cricketer to play in front of this passionate audience. Other international cricket grounds in India include  M.A. Chidambaram Stadium in Chennai, Arun Jaitley Stadium (formerly known as the Feroz Shah Kotla ground) in Delhi, Brabourne Stadium in Mumbai, M. Chinnaswamy Stadium in Bangalore, Wankhade Stadium in Mumbai, just to name a few.  Most metropolitan cities have a stadium some even have two.

The International Cricket Council the highest decision-making body for cricket in the world came into existence in the early 20th century. Sometime in July 1909 the Imperial Cricket Council, the brainchild of Abe Bailey was being considered to set rules and regulations for the control of test cricket between the tri-nations England, Australia, and South Africa.

In 1926 the Imperial Cricket Council invited delegates from West Indies, New Zealand, and India. It was agreed that “the membership of the ICC would comprise of governing bodies of cricket in countries within the British Empire to which cricket teams were sent, or which send teams to England.” These international cricket stadiums were constructed keeping in mind the three important criteria set by International Cricket Council, firstly the length and width, secondly practice and training facilities for the cricketers, and thirdly seating arrangement for the spectators.

Sports and leisure complex is a new concept that has sprung up around various parts of the world from the United Kingdom, Ireland, Australia to Singapore and Canada. In this mad race for modernity where people are giving a major part of their life to make a career or make money, there is no recreation left for them.

Details Of Construction Of The Greenfield International Stadium:

The new age Sports Hub which has been established in Trivandrum, Kerala is the first integrated “sports and leisure complex” in India established in 2015. Trivandrum is often the jewel in the emerald necklace, which Kerala is known as.

The Sports hub is dedicated to the people of Kerala which is famous for its academic class, the universities, research, and development centers and not to forget a hotbed for tourism. Trivandrum or Thiruvananthapuram is the southernmost district and city by the same name is the district headquarters and the capital of Kerala. Trivandrum is a mixture of past glory and charm which is the “old world” and the frantic pace at which modernity has developed is the “new world”.

The people are friendly, hospitable and can communicate in English, Hindi, and Tamil. Trivandrum seems to be just the perfect place for this new age sports hub as it has a pleasant climate throughout the year. The summers are not as hot as expected and the monsoonal rain brings in a zest for a new life. Its construction has been done on 37 acres of land leased out by Kerala University.

Built by Infrastructure Leasing and Financial Services limited known as IL&FS, is India’s leading infrastructure development and finance company. It is a pioneer in developing world-class innovative infrastructure. The project has been conceptualized by the Government of Kerala and promoted through National Games Secretariat.

The Sports Hub is located in a very prominent area of Trivandrum, where spectators from Kerala can transport easily by Bus It houses itself within the confines of Kerala University.

It is on the National Highway 544 which connects Salem district of Tamil Nadu to Kochi district of Kerala. It is 2kms from Technopark, 5kms from Technocity, adjacent to the Rani Laxmibai National College of Physical Education under sports authority of India, 14kms from Trivandrum International and Domestic Airport and 1km from Kazhakkoottam Railway Station. Domestic flights fly to and fro from Delhi, Mumbai, Bangalore, etc and International flights fly to and from Colombo, Dubai, Sharjah, Singapore, etc. 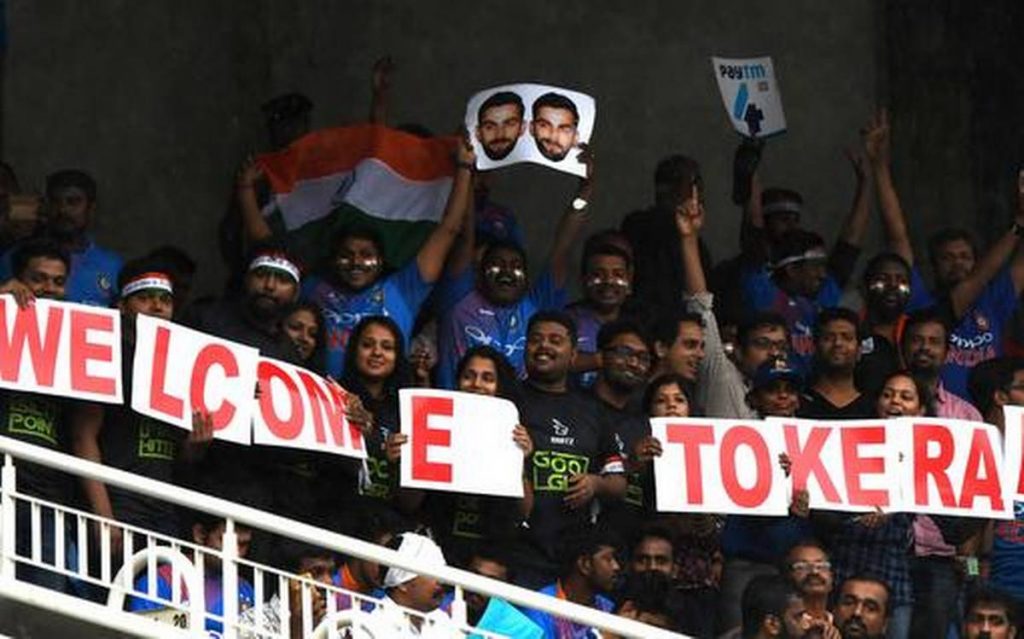 Facilities Of The Greenfield International Stadium:

The specialty of the Greenfield Stadium seating capacity of 50,000 people. The spectators are the lifeline of any sporting event and the stadium has kept in mind the requirements for any sports enthusiast. To make it a memorable event 31 corporate boxes which has a wide array of exclusive services to give the hosts a special and privileged experience.

The sports enthusiast can have a gala time here choosing from a series of services and a great concoction of food and beverages.  A separate space has been allotted for the media and broadcasting agencies who can give a splendid and detailed coverage of the match to those people who prefer staying indoors within the confines of their living-room.

The North Zone has been dedicated to cricket and the east zone for football. What makes it unique are the facilities provided to the cricket and football players, which includes a lounge, gymnasium stockroom, etc. True to its name the other zones accommodate the latest facilities for squash, volleyball, basketball, table tennis, Zumba and swimming.

The Sports Academy is the nurturing ground for any budding sports star. Training is provided for swimming, chess, football, badminton, table tennis and cricket for children. There is also a training center for adults as age is not a barrier to developing a hobby or a passion. The Academy is powered by Vandrum Sports.

This place is perfect for accommodating any guest or for a staycation to get away from the day to day chores. It has 40 smart and spacious rooms with international standard service, surrounded by nature and the eye-catching stadium. Guests can avail of the use of its world-class gymnasium and swimming pool. This is the place where value meets class.

The sports hub Trivandrum (Greenfield International Stadium) is a feather in the cap of the many accolades that Kerala won. It has a top-class facility, first of sports and amusement stadium in India where people from all categories, ages, and various interests can meet together. It hosts international cricket and football tournament where people can watch it.

There are classes and training sessions in various sports for adults and young people. Everybody can use the facility in the world-class gym and swimming pool. From time to time many sports personality, therapists, nutritionists, visit the campus which can be an enriching experience for the attendees. It is a marvelous place to hold get-togethers and parties, it’s the perfect ambiance for official or non-official accumulation. It is filled with lush greenery on all sides and has a great ambiance for kids.

Thus the people of Kerala and India can use this place for physical, mental and spiritual growth. This facility has not been used to its full capacity, thus the people need to venture out and use it for its need. The Kerala government needs to keep its doors open to all strata of people to use it to its optimal level. The cost at which it has been built will fall shallow if it’s not put to good use. The sports facility, training should be within the limits of people’s purse who does not use this sports facility only as an amusement park.

The ecological balance has also been kept in mind while establishing this compound. This sports arena is surrounded by a lot of greenery, a strict no plastic policy and has facilities for rainwater harvesting, with all these advance facilities Trivandrum international cricket stadium will surely host some of the amazing fixtures of 2023 Cricket world cup matches.

Greenfield international stadium matches where team Indian gets a roar crowd support from the passionate sports lovers of Kerala who worship sports as a religion.

This place has organized a lot of helpful work for the Kerala flood victims. Revival an event organized on 17th November 2018 which was an evening of soulful music, exciting art, unending fun and a delectable array of food and drinks. Shona Parbu a nutritionist visited the premises giving healthy tips and a discussion on “Knocking of inches around your waist” on 4th November 2018.

Pet Lovers Meet was organized on 16th September 2018 where animal lovers brought their pets for fun time and meeting expectations on behavioral and psychological sciences. On the 19th and 20th of May, 2018 Dutch Football Coach and former football player MARCO VIS visited for a high-intensity training session. International Yoga Day was celebrated on 8th September for a healthy mind and a healthy body. Sumi Cyriac world-class swimmer visited the stadium for a high-class intensive training.

Only one T20I match has been in the Greenfield International Stadium so far. This was between India and New Zealand on 7 November 2017. India won the run-truncated match (8 overs per side) by 6 runs. 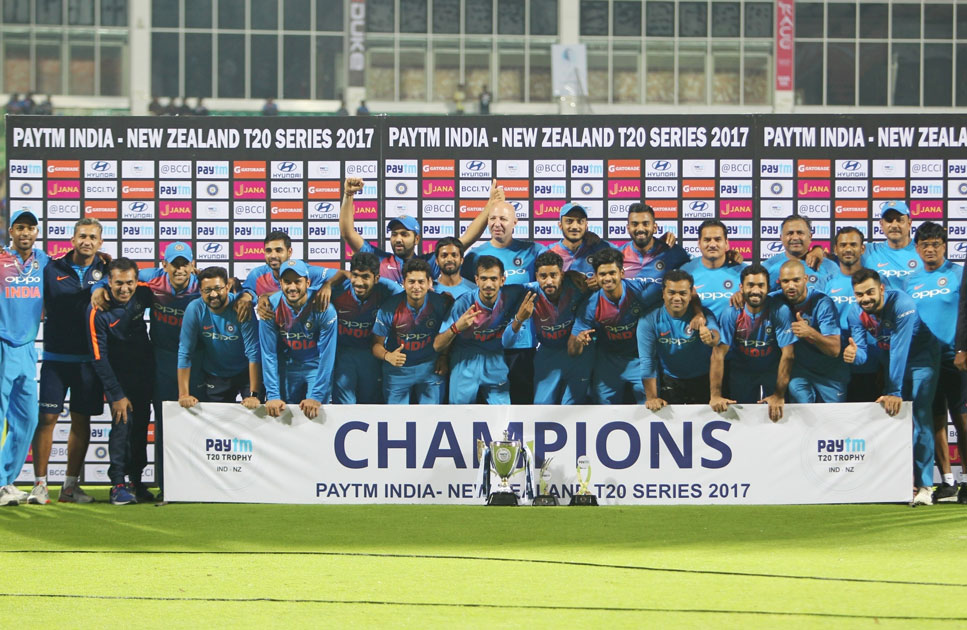 India with the trophy after the game against New Zealand

The second international held at the Greenfield International Stadium was an ODI between India and West Indies. The home side won the game comprehensively by 9 wickets.

A third international game will be played in this venue. It will be the 2nd T20I during the 2019 West indies tour of India. The match will be played on 8 December 2019.

The entire 2015 SAFF Championship was hosted in the Greenfield International Stadium. It was the first international football tournament held in the stadium. The final was played between India and Afghanistan where India won 2-1. The total attendance of the final was more than 40,000 spectators.

The stadium was named the winner of the David Vickers Award for New Venue of the Year. The awards ceremony was held in the Stadium Business Awards 2016 at the Santiago Bernabeu Stadium, Madrid, Spain on 1 June 2016.