The Men in Blue started their ODI campaign against the Windies in a thumping way as they won the first of the 5-match ODI series by eight wickets.

Cricket news: He also praised Rohit Sharma for his role as an anchor to secure the Indian innings

The Windies had given a stiff target of excess of 320, but the Indian team pulled it off with 47 balls still left in their innings. This is why the critics have started believing that the entire series would be a cakewalk for Kohli and Co.

Among many critics was former Indian captain Sourav Ganguly who have firm faith in the abilities of the side. After the win, he spoke about the side’s success points very highly and said that the manner they took the run chase, it felt they had no pressure dealing with the situation.

“It was a fantastic performance. It never felt as if they are under pressure of a stiff target. They easily won the match and I strongly believe they will seal the series too,” Ganguly told IndiaTV during the show ‘Cricket Ki Baat’.

India chased the target on the backs of two centurions in the likes of Virat Kohli and Rohit Sharma. Kohli looked sublime with the bat and got his 36th ODI ton. Ganguly believes the way Kohli bats, he gives inspiration to other batsmen with his strokeplay.

“Virat Kohli is a great player. Anything is possible for him. In 80s we had Gavaskar, then Sachin came and now we have Virat Kohli. With his impressive strokeplay, he also inspires other batsmen. Kohli is like a diamond in the team. He makes batting look so easy when he comes at the crease,” said the former Indian captain.

Ganguly also hailed Rohit’s performance, who served as an anchor to the innings and later blasted after his skipper got out. Rohit remained unbeaten on 152 to see his team home. Ganguly believes when it comes to the ODI format, Rohit is no less than Virat Kohli.

“He (Rohit) is no less than Virat Kohli. He started slow yesterday but anchored the innings and led India to the victory. He has gained confidence in his game with time. In captaincy too, he has proved his mettle. This is the time for the selectors to take Rohit along on the Australian tour for the Test series. He has matured a lot in last two years,” Ganguly noted. 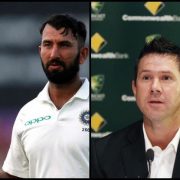