England leads the match by 311 runs on Birmingham ground

Pakistan started the fourth day with completing the first innings for a total runs of 400 at the cost of 10 wickets. Batting power degraded soon after the skipper left the crease, Misbah-ul-Haq scored 56 off 107 balls, comprising of 6 boundaries. 46 more runs came from the unbeaten keeper Sarfraz Ahmed, after smashing 5 boundaries.

On the other end, Chris Woakes and Stuart Broad finished the innings picking 3 wickets respectively. James Anderson gathered 2 wickets in the 1st innings.

On the end of fourth day England made 414 runs for the second innings losing 5 wickets in 125 overs. Jonny Bairstow still on crease with an undefeated score of 82, hitting 8 boundaries. Moeen Ali still on crease with 60 runs off 84 balls. Skipper Alastair Cook had to leave after providing 66 runs for his team with 7 boundaries added to his name. Joe Root scored 62 runs where as Alex Hales returned to the pavilion for 54, smashing the highest number of 10 boundaries.

Yasir Shah and Mohammad Amir, both the bowlers left the ground after having 2 wickets each and Sohail Khan managed to get a single man. 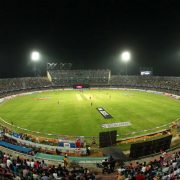