Chennai Super Kings who have a better head-to-head record against the Rajasthan Royals will face each other on April 20 in the 11th edition of the Indian Premier League.

VIVO IPL 2018: Chennai and Rajasthan both eager to bring up underrated rivalry

The rivalry is not much famous, unlike the rivalry between Mumbai and Chennai or the South Indian derby between Bangalore and Chennai. This is because Rajasthan has always been comfortable in avoiding the spotlight.

Both the teams have faced each other many times, the last clash almost three years ago, and were the two finalists in the inaugural IPL in 2008 where Rajasthan came out victorious.

Ravindra Jadeja, who was the star in the last encounter with four wickets, have not yet fired with his bowling this season. Shane Watson, who played a major role in Rajasthan’s success in the first eight years, has swapped sides.

Rajasthan has shred the tag of being misers in the auction and has bought Ben Stokes and Jaydev Unadkat, the two costliest players this time.

Rajasthan had a mixed start this season, winning two games and losing two. Stokes and Unadkat haven’t yet stamped their authority while D’Arcy Short is still coming to grips against spin attack.

Sanju Samson has stood out from the rest while skipper Rahane has got good starts but has failed to convert them. They are hoping their bowling attack, made with Indian players mainly, would deliver in this match.

All the games of CSK were entertaining as they went on to win two matches in the last over, while Dhoni’s best IPL knock almost gave them the third win.

The point of discussion would be how CSK performs after their recent change in home ground from Chepauk to MCA, as the team was formed mainly based on the Chennai environment. 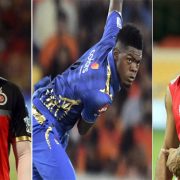