In the whole Bangladesh team, batsman and opener Tamim Iqbal has been one of the most consistent performers of the team over the last few years.

Cricket news: He feels one should admire and learn from watching Kohli

Although the 29-year-old is among the highest and consistent run-getter for his team, yet he is often hindered in his career by various types of injuries.

The current year has been a start-stop in Tamim’s career, and now he is currently getting well from fractured left wrist which he had received during the Asia Cup.

He recently opened up on the incident where he came out to bat with his broken wrist. He said that it filled him with pride while facing that one ball with broken wrist.

“Playing for my country is my biggest pride. I thought facing one delivery could have helped Bangladesh get 5-10 extra runs in that game. And we ended up getting 32 runs because of Mushfiqur’s brilliance,” Tamim told Khaleej Times in an exclusive interview on Monday.

“@imVkohli is someone to watch and admire and also learn from. I think he has been fantastic.” https://t.co/l4H41GUp5y

Also Tamim spoke highly of Indian skipper Virat Kohli and said that he is totally from another league. Kohli has recently scored his 36th ODI century in the first ODI against the Windies.

Tamim seems to be awestruck with Kohli and said that sometimes he feels that Kohli is not even human. He also said that he has never seen anyone dominate the game like Kohli does.

“I sometimes feel he is not human because the way he performs, my goodness, the moment he comes out to bat, it looks like he is going to score a hundred every game,” the Bangladesh opener said.

“The way he looks after himself, the way he works on his game, it’s unbelievable. He is probably the number one in all three formats. He is someone to watch and admire and also learn from. I think he has been fantastic. And I have seen all the great players that have played the game in the past 12 years. They have their own strong points. But I haven’t seen anyone that has dominated as much as Virat has.” 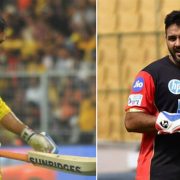