There is a fierce trans-Tasman rivalry between Australia and New Zealand. However Luke Ronchi is the only player to have played for both these two countries. Ronchi was born in New Zealand but was bought up in Australia.

He also started promisingly for the Aussies, but a dip in form led to his removal from the national team. In order to prolong his international career, Ronchi decided to move to his birth country. In 2013 he was selected to play for New Zealand.

He later made a record-breaking 267-runs partnership for the 6th wicket with Grant Elliott. This partnership destroyed the Sri Lanka’s bowling attack. Ronchi played the 2015 World Cup, where Australia defeated the Kiwis in the final. Ronchi is currently a part of coaching staff for the BlackCaps.

One of the most beloved cricketers, Imran Tahir, also played for two countries. He played for Pakistan in the U19 level and also for Pakistan A side. However he couldn’t make it to the national side as Pakistan already had some quality spinners.

This is why Tahir decided to apply his trade somewhere else. He knew South Africa lacked spinners and this is why he moved to that country. Tahir debuted for the Proteas in the 2011 World Cup and since then has become one of their key members.

He is also one of the only bowlers to be ranked No. 1 in both ODI and T20I simultaneously. After South Africa’s early exit in the 2019 World Cup, Tahir decided to retire from ODIs. However we expect to see his unique celebration in the shortest format for some more time. 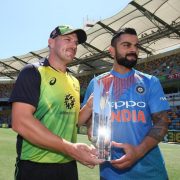